R100 WORKSHOPS WITH THE EXPERTS
WHY WE START WITH CULTURE

An organisation’s culture could be described as the dynamics between a group of people and the sum of the perceptions, beliefs and values the group possesses. Or as what it feels like to be somewhere - because culture is not something you can always put your finger on. Another way to think about it is as “the way things we do things around here”.

Organisational culture is curious, complex and in many ways subtle, even ambiguous.

But it is also the single most important attribute of any business or organisation and the most critical determinant of morale, cohesiveness, effectiveness and future success.

A business neglects culture at its peril. Those who are aware that ‘culture eats strategy for breakfast’ treat it with due care and attention, and invest in it on an ongoing basis. 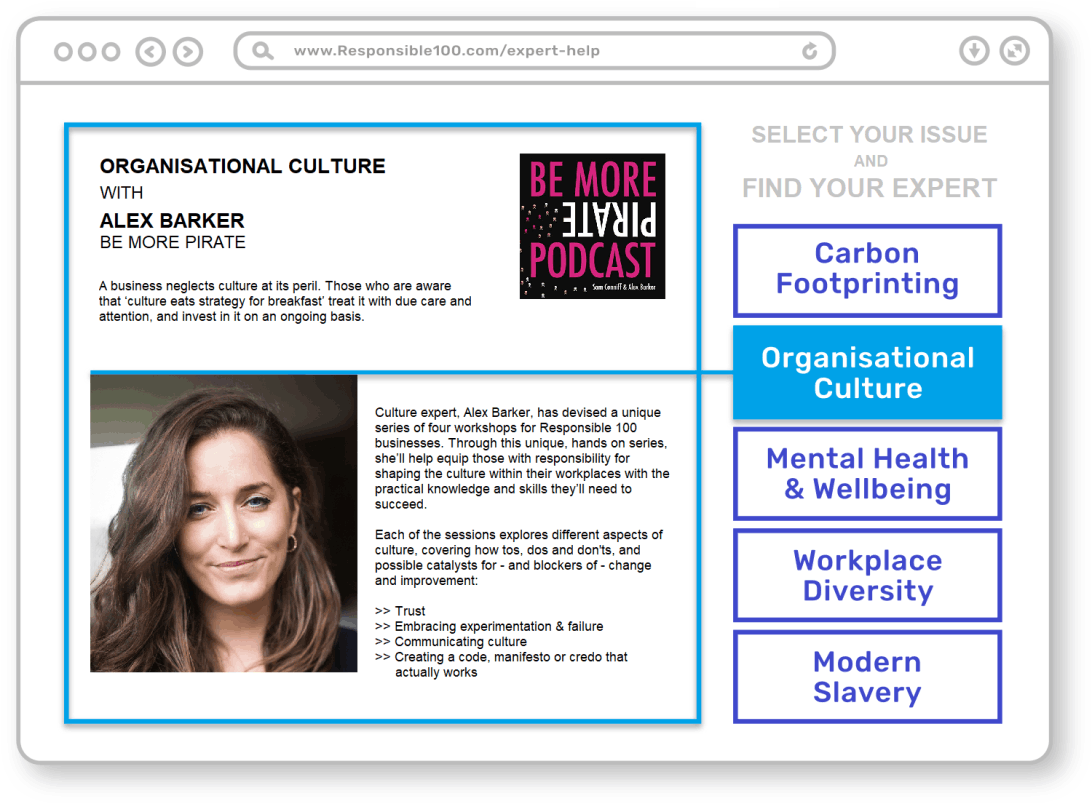 This tailored and hands-on series will equip those with responsibility for shaping the culture within their workplaces with the practical knowledge and skills they’ll need to succeed.

Each of the four modules explores different aspects of culture, covering how-tos, dos and don'ts, and possible catalysts for - and blockers of - change and improvement:

WHO IS THE COURSE FOR?

Participate in this course if you are a:

HOW WILL THE COURSE WORK?

We’ll create a 15-20 minute video each month to introduce the aspect of culture that we’ll be working on. Participants will be tasked with simple assignments and experiments to undertake in the course of the first 3 weeks of the month.

At the end of each month, we’ll run a 90 minute online interactive sessions with a number of other comparable businesses. During these live sessions, we’ll discuss what we learned in the course of the month, what worked, what didn’t, and why this may have been the case.

Throughout, you’ll also receive support and encouragement from Responsible 100. We’ll provide all our culture resources, including our benchmarks, know how, and links to supplementary material to enable you to discover more about any aspect of culture in more depth. You’ll be able to work through all such supplementary materials at a time and pace to suit you.

In doing this course, you will:

WHY PIRATES AND WHY ALEX?

How was it that on 18th century ships, a group of largely illiterate sword-carrying strangers managed to create the kind of workplace culture that we are still striving for today? Real diversity and equality? A fair and equitable reward system? Agency, accountability, transparency and trust?

When we think of pirates we tend to imagine bloodthirsty, drunken villains, but the truth is that they were collaborative, creative and highly organised. Pirates have a lot to teach us about culture.

Alex Barker runs Be More Pirate, a book turned social movement and consultancy that supports individuals and organisations to apply pirates principles to achieve their goals and have a positive impact on people and planet.

Over the past three years she has worked with hundreds of people and dozens of teams across the public and private sector, helping to improve their culture. Alex has a deep understanding of what underpins a strong organisational culture and many of these ideas are captured in her

book How to Be More Pirate, which is a sequel to the original, capturing the learning from their global pirate network.

Alex’s approach to culture change is frank and realistic: pirates have no time for dithering or dishonesty, so there will be no fancy frameworks, high level abstract theories or sweeping things under the rug. Instead she works on some of the common but most critical indicators that underpin challenges around team culture: trust, courage, communication and purpose.

Alex has run large scale team workshops for companies such as innocent drinks, Oracle, Salesforce as well as various teams across the NHS. For the past year she has worked in depth with housing association ForHousing, supporting them to work more effectively with their communities and co-produce local initiatives with tenants.

Alex’s strengths are never coming from a business as usual perspective and pushing people past the belief that change is not possible. Pirates exist at the edges of the map in the future terrain that is both exciting and daunting, so the goal is always to confront some of the uncomfortable things that hold everyone back in order to uncover the opportunities for long lasting results.

"Corporate reports are often regarded as greenwash because they fail to explore and reveal what really happens on the ground - Responsible 100 reflects reality."
Head of Corporate Responsibility & Ethics, Legal & General
JOIN US

Responsible 100 is delivered by Profit Through Ethics Ltd., a business registered in England with company number 4769798.
All Rights Reserved.